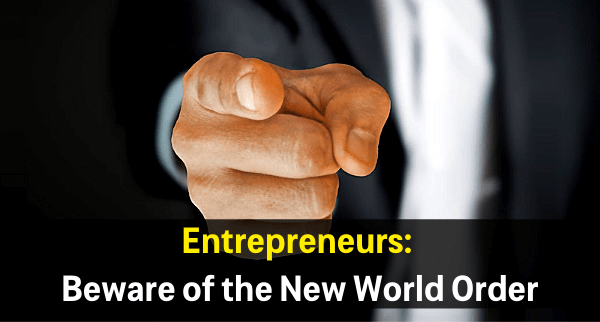 Hindsight is always 2020 but living in the moment can be quite blinding. So it’s time we take a pause and look at the direction that our world is heading in. Hindsight has allowed us to trace how the Treaty of Versailles and the Great Depression enabled the rise of Hitler, something that devastated the world. But the globally connected world of today enables butterfly effects to ripple and amplify far more rapidly and a hell of a lot stronger. Therefore, it’s not too far-fetched to smell the danger coming, especially in the current state of the world. Speaking at a webinar Ziad K Abdelnour said: “A new world is going to unfold and we don’t know as yet how it would look like. The next 3-5 years will remind us that COVID-19 was essentially just the drizzle before the real storm.” The new world order is on the rise and somehow, we must wake up and stop it in its tracks. It is more than just a theory; this is real life. Just to touch upon a couple of elements of what’s going on here, tech wars and globalization are on the horizon, both of which are threats to capitalism if not addressed now. And a threat to capitalism is a threat to all of our access to wealth and freedom.

Tech Wars: Race to Domination
Many including myself, had already made predictions of great technological movements that would widely disrupt many industries and create others. However, the outbreak of Covid19 has accelerated structural shifts in the consumption, working and the use of technology. This has begun to spark what will be a global race for tech supremacy, in which there are a few extremely wealthy individuals looking to use this as a means to project themselves to world domination.

According to a survey conducted by Bank of America, half of its analysts expect higher IT spending and a wave of moonshot investments. This could pull forward the commercialization of moonshot technologies such as autonomous vehicles, quantum computing and vertical farming, as more nations look to “get an edge in the race for tech supremacy.” In other words, the chase for tech-based “unicorns” that has been going on in Silicon Valley for years, essentially just turned into a global race for domination. If a select few can get in front of this tech race, they will essentially control the majority of the world’s technology, jobs and of extend the divide in wealth distribution.

“Don’t get me wrong,” says Ziad Abdelnour, “disruptive technologies can bring about much good for the world if constructed in the right way and used for the right reasons.” On one hand, it will make certain jobs obsolete, but inevitably it creates new careers and business opportunities for those who look around corners. “Disruption only devastates those who are not prepared or who try to fight against it and lose” Ziad adds. However, some people will not be struck with the element of surprise. As an entrepreneur, as you move forward with your endeavors, ask yourself: In the future, is it likely this niche will exist? If the answer is yes, figure out how you can make that happen sooner and beat some of these money-grubbing savages to the punch.

Even though disruption is on the horizon, don’t let their wild goose chase intimidate you into shying away from achieving your own business goals. While the lasting legacy of this [Covid-19] will be a combination of new communication infrastructure, data generation, cloud computing power and bandwidth, some things just won’t change. While technologies and related best practices evolve, the fundamentals of business will always remain as important as ever.

A Push for Globalism = Loss of Capitalism
While a lot of these extreme leftist leaders and their co-conspirators have done everything except for coming out and say that there is indeed a push for a globalist agenda, Covid19 has revealed the cards they are trying to play. Big Government will be back in a big way if left up to them. “COVID-19 has already handed governments a new social mandate which they justified as protection for their citizens. However, what they didn’t tell you is that they are also using these same powers to exert greater influence on businesses with shareholder supremacy potentially eroding in favor of stakeholders. Has it ever crossed your mind that with unemployment rates soaring and America reaching a depression-like a state amongst this crisis, somehow the billionaires of America gained over 565 billion dollars since mid-March? Trust me, it’s not because their businesses are just all brilliant. A lot of it has to do with government interference.

They are slowly, but surely trying to take away the democratization of entrepreneurship and rip away the opportunity for more people to look to themselves as the engine to grow beyond their circumstances. They are trying to disable the stable systems that democracy tends to bring. They are attempting to take away our abilities as entrepreneurs to see ourselves and not the government as the answer to society’s challenges. Even though the government does not have a lot of answers, the more we rely on the government, the more dependent we become, and the more we put our faith into the hands of others. And unfortunately, if everything was concentrated in the hands of a few … “those few would use their wealth to control other citizens, seize political power, and warp the republic into an oligopoly,” just as historian James L. Houston wrote in the American Historical Review.

All in all, don’t be thrown off by the fact that most of us have been set in a consistent state of stress since the start of this year. With all that’s been going on, it’s easy to turn a blind eye to what the media wants to portray as some sort of crazy conspiracy theory. But don’t be fooled, there is certainly a push for new world order and if we don’t put up a fight, we are essentially handing over our access to wealth and freedom. As capitalist entrepreneurs, we have to continue to push forward with our businesses and stand up for our democracy. Wealth and freedom shouldn’t be limited to just a few elites. Everyone deserves the opportunity to create their own wealth and access a life of freedom.

Ziad K. Abdelnour, Chairman, President & CEO of Blackhawk Partners Inc, is widely regarded as one of the world’s top business leaders. In addition to being a best-selling author, he is also a founder and Chairman of the board of the Financial Policy Council.

Join Ziad on board and learn how to create the biggest wealth creation platform ever by booking a Free Strategy call by Clicking Here.

Alternatively, you can register directly for the course and private membership group by Clicking Here.

Think About it: The Mental Exercise Every Successful Person Needs
A person's most powerful tool is the unconscious thought that they have ...
Donated Crypto Assets to Ukraine? Your Livelihood is Now at Risk
URGENT: Our ally desperately needs our help! Quick, donate all of your c...
The Media Strikes Again: Don’t Fall for the Anti-Russian Hype
Has the world gone mad? The media is back at its manipulative antics and...
Crypto: There’s No Playing it Safe
There’s been a major shift in investment strategies over the past coup...
Massive Psyops in Play
How do you take control of the world? Especially wearing pastel sweaters...
Be the Great White Shark
Wealth creation and the financial empowerment to truly live a life of fr...
Who Can You Trust?
It’s time for some of you all to get real. You can’t trust everythin...
It’s Not Over Just Yet
“All hail our almighty savior Bill Gates and the vaccine that saved th...
A Few Tips for Success in the Midst of Economic Hardship
If you are used to living an easy life and being able to spend most of y...
Why People Have Lost Faith in Capitalism
America used to be the great land of opportunity...that was until decept...
The Invasion Continues
A recent poll has shown that only about 2% of people are happy with the ...
Watch Out: Your Job is on the Line
My oh my, how things have begun to change. Business operations are certa...
What’s Yours is Mine
As I checked my social media today, I came across an interesting debate ...
5 Mistakes That Will Hold you Back
When you turn 30, you feel more like you're in your 20s, but you've turn...
Lessons from the Top 1%
You learn a lot of lessons in life. After all, you live and you learn. B...
Moral Economics – Capitalism
A lot of morons out there like to make a “moral” argument against ca...
Equality is a Myth
It amazes me just how many people have fallen for this equality scam tha...
Protect Your Worth: Where to Keep Your Money
A lot of people believe that creating wealth is all about generating inc...
5 Wealth Creation Strategies That the Average Joe Overlooks
Everybody wants to be wealthy, but the overwhelming majority of people r...
Which Type Investor Are You?
When investing in the stock market, your mindset will have a significant...